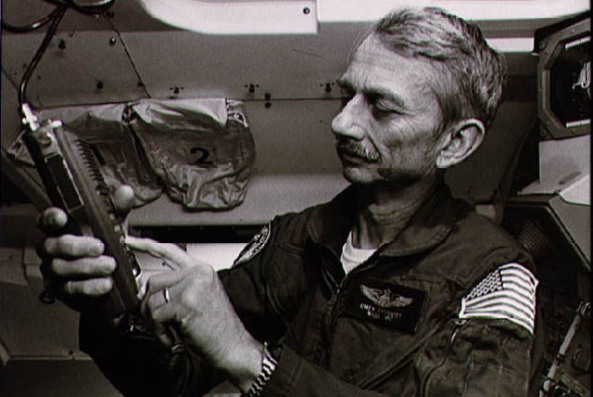 HUNTSVILLE, Ala. (NASA PR) — Former astronaut and long-duration spaceflight pioneer Owen Garriott, 88, died today, April 15, at his home in Huntsville, Alabama. Garriott flew aboard the Skylab space station during the Skylab 3 mission and on the Space Shuttle Columbia for the STS-9/Spacelab-1 mission. He spent a total of 70 days in space.

“The astronauts, scientists and engineers at Johnson Space Center are saddened by the loss of Owen Garriott,” said Chief Astronaut Pat Forrester. “We remember the history he made during the Skylab and space shuttle programs that helped shape the space program we have today. Not only was he a bright scientist and astronaut, he and his crewmates set the stage for international cooperation in human spaceflight. He also was the first to participate in amateur radio from space, a hobby many of our astronauts still enjoy today.”

Garriott was born in Enid, Oklahoma. He earned a bachelor’s degree in electrical engineering from the University of Oklahoma, and master’s and doctoral degrees in electrical engineering from Stanford University, Palo Alto, California. Garriott served as an electronics officer while on active duty with the U.S. Navy from 1953 to 1956, and was stationed aboard several U.S. destroyers at sea. He then taught electronics, electromagnetic theory and ionospheric physics as an associate professor at Stanford. He performed research in ionospheric physics and has authored or co-authored more than 40 scientific papers and one book on this subject.

He was selected as a scientist-astronaut by NASA in June 1965, and then completed a 53-week course in flight training at Williams Air Force Base, Arizona. He logged more than 5,000 hours flying time — including more than 2,900 hours in jet and light aircraft, spacecraft and helicopters. In addition to NASA ratings, he held FAA commercial pilot and flight instructor certification for instrument and multi-engine aircraft.

Garriott was the science-pilot for Skylab 3, the second crewed Skylab mission, and was in orbit from July 28 to Sept. 25, 1973. His crewmates were Commander Alan Bean and Pilot Jack Lousma. The crew accomplished 150% of mission goals while completing 858 revolutions of the Earth and traveling some 24.5 million miles. The crew installed replacement rate gyros used for attitude control of the spacecraft and a twin pole sunshade used for thermal control, and repaired nine major experiment or operational equipment items. They devoted 305 hours to extensive solar observations and completed 333 medical experiment performances to obtain valuable data on the effects of extended weightlessness on humans. The crew of Skylab 3 logged 1,427 hours and 9 minutes each in space, setting a world record for a single mission, and Garriott spent 13 hours and 43 minutes in three separate spacewalks outside the orbital workshop.

On his second and final flight, Garriott flew as a mission specialist on the ninth space shuttle mission and the first six-person flight. He launched aboard the Space Shuttle Columbia for STS-9/Spacelab-1 from Kennedy Space Center, Florida, on Nov. 28, 1983. His crewmates were Commander John Young, Pilot Brewster Shaw, Jr., fellow mission specialist Robert Parker, and Payload Specialists Byron Lichtenberg and Ulf Merbold of (ESA) European Space Agency. This six-person crew was the largest yet to fly aboard a single spacecraft, the first international shuttle crew and the first to carry payload specialists. During STS-9, the first human amateur radio operations in space were conducted using Garriott’s station call, W5LFL. After 10 days of Spacelab hardware verification and around-the-clock scientific operations, Columbia and its laboratory cargo landed on the dry lakebed at Edwards Air Force Base, California, on Dec. 8, 1983.

Garriott held other positions at Johnson Space Center such as deputy and later director of Science and Applications, and as the assistant director for Space and Life Science.